Chinese President Xi Jinping congratulated Prime Minister Narendra Modi on the National Democratic Alliance (NDA) decimating the opposition and the BJP emerging as the single-largest party in the national election.

“On the occasion of the National Democratic Alliance winning the 17th Lok Sabha election of India under your leadership, I would like to extend my heart-felt congratulations,” Xi said in a statement tweeted by China’s ambassador to India Luo Zhaohui.

“As important neighbours to each other, China and India are the two largest developing countries and emerging economies in the world. In recent years, China-India relations have shown strong momentum of development under the joint efforts of both sides,” Xi said.

“I attach great importance to the development of China-India relations and would like to work with you to guide the development directions of the bilateral relations, enhance mutual political trust, expand pragmatic cooperation and promote the closer developmental partnership between the two countries to a new height,” Xi said in the statement.

The BJP is set to cross the 300 mark on its own – as leads showed a NDA sweep in the national elections. The BJP will manage to keep its core states – the Hindi heartland, Gujarat and Maharashtra – while posting fresh victories in Bengal, Odisha and the northeast.

India and China trade ties have seen growth in the last five years, but the two nations have had frictions over geopolitical and territorial issues. An element of China’s “One Belt One Road” project, called the China-Pakistan Economic Corridor that passes through Pakistan-occupied Kashmir, has been one of the pain points in ties between the two nations. The armies of India and China were also locked in a nearly three-month-long standoff on Doklam plateau in June 2017.

China had for long blocked India’s move to make the United Nations ban Pakistan-based terrorist Masood Azhar before he was finally blacklisted earlier this month while the national election was going on.

Election Results for Lok Sabha Election 2019 will be out on May 23. Get the latest election news and live updates on ndtv.com/elections. Catch all the action on NDTV Live. Like us on Facebook or follow us on Twitter and Instagram for news updates from each of the 543 parliamentary seats for the election 2019 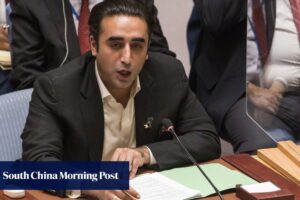