Cricket fans were served with an exceptional display of leg-spin bowling on Sunday as Gwadar Sharks, led by Saad Masood, ran through Mardan Warriors’ batting to record a massive 77-run win with as many as 21 balls to spare.

Saad’s stunning leg-breaks and venomous googlies sparked an extraordinary collapse that saw Mardan lose their last four wickets for only eight runs. The lanky teenager took only 15 balls to record the Pakistan Junior League’s maiden five-fer and returned a staggering five for six.

That Saad did not bowl leg-spin until recently is astonishing for everyone who has had a look at his brilliant spell, laced with incredible sly switches between leg-breaks and googly and subtle variations of pace.

“I was an off-spinner but started to bowl leg-spin during the Gwadar Sharks camp after Mushi bhai [Mushtaq Ahmed, team’s coach] told me to do so,” Saad revealed. “Having Mushi bhai around is really helpful. We speak a lot about the art of leg-spin and discuss how I have to bowl in different conditions.”

The Pakistan Cricket Board has attached a panel of high-profile coaches and team mentors with every PJL side so the up-and-coming cricketers have access to the knowledge of some of the best cricketers to have ever taken the field from around the world and the strategy has paid dividends.

“I spoke to Mushi bhai before taking those five wickets. The ball was skidding because of dew and it was difficult to grip it so we discussed what I needed to do.”

The maiden five-fer was not the highlight of Saad’s night, however. That came a little later.

“The greatest moment of my life came after when Sir Vivian Richards hugged me [after the match]. It is something I will never forget. When I got to know I will play for Gwadar Sharks and he will be our mentor I was overwhelmed and did not expect him to be forthcoming. But, he is extremely helpful and jolly. He looks after us. When someone is not performing, he goes to that player himself and gives him a pep talk. It is huge for us.”

Saad, an all-rounder who also bats right-handed, hails from Rawalpindi and his interest in cricket developed after watching his elder brother, Umair Masood, a first-class cricketer who is currently playing for Northern second XI in four-day Cricket Association Championship and has represented Pakistan U19. When he expressed his desire to become a cricketer, he had the support of not only Umair, who he calls his ‘support system’, but the entire family.

“It [being at the PJL] is quite a proud moment for my family and me,” he says. “Wherever I am today is because of my family. They have provided me unconditional support, especially my mother and father [who passed two years back]. My brother has been my support system. You need someone to back you as a cricketer when you go through a rough patch and he has always been there for me.”

Saad is a product of PCB’s age-group programmes. He played for Rawalpindi in U13 Inter-Regional T20 Tournament in 2018. He took 12 wickets (fourth highest in the tournament) and made 118 runs in six matches for Northern in National U16 One-Day Tournament in 2020-21 before he graduated to the U19 level and played for Northern Blues in the One-Day and Three-Day championships earlier in the year.

He has set out on this path with the dream of becoming a Test cricketer. “Since I started to play cricket, my only goal has been to play Test cricket for Pakistan. As I am an all-rounder, I want to be the top-performing all-rounder wherever I play. I want to keep things simple as it helps you stay focused when you keep things that way.”

In 2017, a talented teenager from Rawalpindi, Shadab Khan, who is now Pakistan’s white-ball vice-captain, made his Pakistan debut after an impressive HBL Pakistan Super League with Islamabad United. Who knows, Saad could be the next leg-spinner to make it to the apex level from that city. 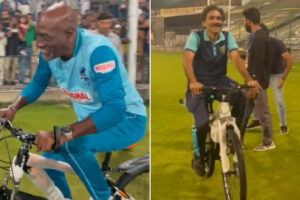