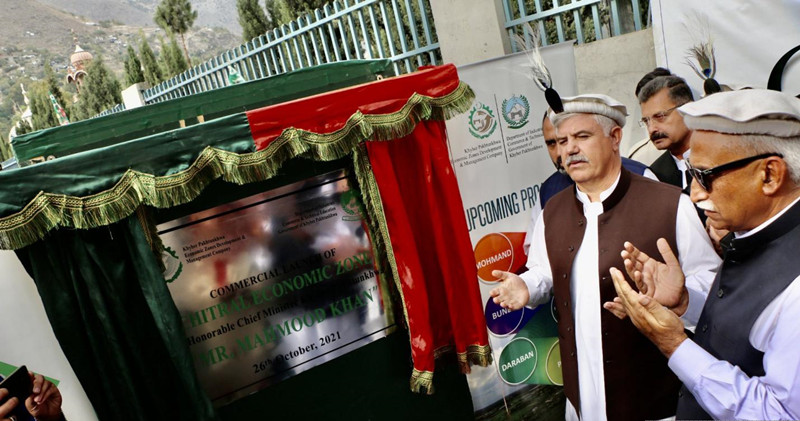 CHITRAL, Oct.27(Gwadar Pro) – In its efforts to uplift the remote region, the Government of Khyber Pakhtunkhwa (KP) on Tuesday initiated the development of Chitral Economic Zone (CEZ) in Pakistans northernmost region of Chitral.

Chief Minister KP Mahmood Khan inaugurated CEZ, which spreads over an area of 140 acres. The economic zone, with an expected Rs. 621 million investment, will create an estimated 1,600 direct jobs and 6,400 indirect jobs.

Over the next three to four years, Chitral will be the business hub for the entire region. Chitral is going to become Western Route of CPEC, said Mahmood Khan at the inauguration of CEZ.

According to Chief Minister KP, the Government has already approved Chitral-Shandor CPEC Route, connecting the district with Gilgit and China beyond.

In July 2021, the Federal Government decided to make the Gilgit-Chitral section of the road part of CPEC’s Western Corridor.

Mahmood Khan said that a link amongst GB, Shandor, Chitral, Chakdara, Peshawar, and Dera Ismail Khan would be established through different connecting projects, adding that all these areas would be interconnected.

Chitral-Shandor road is 172-km long while the distance between Gilgit and Shandor is 212 kilometers. Similarly, Chitral-Chakdara-M1 is another 214-km proposed connectivity project linking Chitral with Chakdara (Lower Dir). Chakdara is connected with Islamabad-Peshawar Motorway (M1) via 80-km Swat Expressway. The Government of KP has approved that the 365-km long Peshawar D.I. Khan Motorway will connect upper parts of KP with CPEC’s western alignment Hakla-D.I Khan Motorway (M-14) in the southern part of the province. The southern parts of KP will be connected with Gwadar via Zhob-Quetta Motorway.

In the future, Chitral can work as a link between China and Afghanistan, as three crossings exist between the Chitral district of KP and Afghanistan.

“For Chinese, this will be the shortest route to Afghanistan and beyond,” said Mahmood Khan, adding it will not only lift Chitral but the entire Malakand division. According to him, after Torkham, Salim Pass will be the second major border crossing between Pakistan and Afghanistan in the future. Salim Pass, also known as Durah Pass, is a trade route between Chitral and Badakhshan Province of Afghanistan.

The government of KP has launched different development projects in Chitral, as the area is becoming the future business hub of the entire region. Around Rs.37 billion projects are underway in Chitral while Rs.31 billion connectivity projects will be initiated in the near future, Mahmood Khan added.