Center for Global and Strategic Studies (CGSS) organized an Online International Conference on 26th Oct 2021 to celebrate the “50th Anniversary of Restoration of Lawful Seat of the Peoples’ Republic of China in the United Nations. Renowned Analysts and Experts from Pakistan and China addressed the conference. 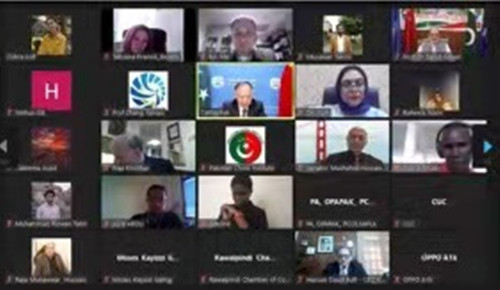 In his welcoming address, Ambassador of Peoples Republic of China to Pakistan Nong Rong said that through joint efforts of Pakistan and China, we will witness more progress in our bilateral ties and a stronger partnership in the international arena.

Nong Rong also mentioned that China and Pakistan have stayed together to overcome many obstacles. Together we have prospered and achieved many milestones, he added.

He stated that China is at a peaceful rise and it is rising in fields of technology, artificial intelligence and many more.

Dr. Zahid Anwar, Dean of the School of Social Sciences and Director of the China Study Centre, University of Peshawar, said BRI could bring win-win cooperation for China and other countries.