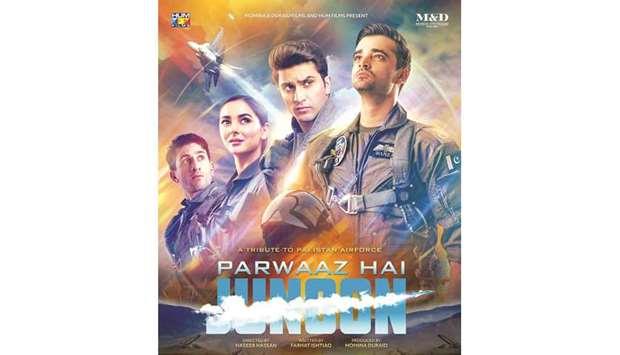 (MENAFN – Gulf Times) Collaboration in the film industry has the potential to elevate people-to-people co-operation and understanding between Pakistan and China, a Beijing-based Pakistani analyst told Chinese media CGTN Digital after two movies from her country made headlines in China last month.
The analyst said the co-operation and understanding between the two sides have already been consolidated by the joint projects under the China-Pakistan Economic Corridor (CPEC), such as the recently completed Orange Line Metro train service in Pakistan’s eastern city of Lahore.
On November 13, Parwaaz Hai Junoon (Flight is Passion) became the first Pakistani movie to be commercially released in the Chinese mainland in over three decades. A Pakistani short film Amity Along the Orange Line was among the entries that were applauded at the Second Belt & Road Initiative (BRI) Short Video Competition award ceremony in Wuhan on November 20.
‘I think movies are critical and vital. We’ve been talking about it for years. And this is definitely a historic moment, said Zoon Ahmed Khan, a research scholar at the Institute of Belt and Road Initiative, Tsinghua University.
The researcher said following the launch of CPEC, more Pakistanis are living in China, and many Chinese are living in Pakistan but there is still a big scope for both sides to learn about each other through the strengthen people-to-people linkages.
‘People’s sentiments in both countries are extremely warm and reciprocal but at the same time there exists a lack of awareness about each other’s culture, said the scholar, adding films are the most effective way to offer a true picture of what normal people go through; what their lives are; about their history, their preferences, food, etc.
Amity Along the Orange Line depicts the joy of Pakistani people at the completion of the Orange Line of Lahore Metro, a project built with Chinese partnership as part of the CPEC under BRI. The Orange Line, which went operational on October 25, is Pakistan’s first metro rail system.
‘Lahore is the second largest city in the country. The infrastructure projects under CPEC are critical and vital for the overall development of the country, said Khan, stressing that the metro project will solve the traffic congestion issues of the city besides creating new jobs.
Parwaaz Hai Junoon is the first Pakistani movie to be commercially released in the Chinese mainland in over three decades.
Khan has already watched Parwaaz Hai Junoon twice with her Chinese and Pakistani friends in Beijing. One of the highlights of the movie is that it features the JF-17 fighter jets jointly manufactured by China and Pakistan.
‘It is a very patriotic movie. It shows young people who are passionate about making a positive change. This is something that the Chinese people connected with, Khan said.
‘The comments on Chinese social media apps, and also my friends who watched it, showed how amazed they were at the beautiful sceneries — the magnificent glaciers, mountains, and even the greenery, etc., the Pakistani researcher added.
Before Parwaaz Hai Junoon, the 2017 romance film Chalay Thay Saath (We Walked Together) became the first Pakistani film to be screened in Hong Kong, but it never made it to the Chinese mainland. The film features Chinese Canadian actor Kent S Leung as a Chinese traveller who falls in love with a Pakistani girl.
Only a handful of Pakistani movies have hit the theatres in China ever. The 1956 film Baaghi (Rebel) — supposedly based on a Chinese folktale — is believed to be the first of the lot. It was screened in China in the 1960s. The 1975 romantic drama Mera Naam Hai Mohabbat (My Name is Love) is another prominent Pakistani movie that saw a limited release in China.
Up until the 1970s, Pakistan had a thriving film industry, popularly called Lollywood, a portmanteau of the industry’s hub in Lahore and Hollywood. From the production of 100 films annually in the 1970s, it nosedived sharply to just 20 films in 2018.
The Chinese film industry, in contrast, came almost to a standstill from 1967 to 1972 during the Cultural Revolution and took off again after the country embraced liberalisation in 1979. In recent years, China has transformed itself into one of the global hubs of movie production and the world’s largest film market.
Access to China’s vast film market can be a game-changer for Pakistan’s fledgling film industry and is key for its revival, said the scholar, pointing out that it is not easy to enter the Chinese market because there is only a limited number of foreign movies that can be released every year.
‘This is one aspect that we need to focus on, she said, hoping that joint productions with China may be one way to gain a foothold. Khan is hopeful that future joint productions could be filmed in Pakistan to take advantage of its natural and diverse locations.
Khan also felt that the Pakistani people’s inherent interest in China could also make the South Asian country of 212 million a viable market for Chinese movies. ‘Pakistanis are interested in knowing more about Chinese culture. So, for Chinese films to enter Pakistani cinemas is relatively easier.
She contended that releasing Chinese movies dubbed in Urdu, Pakistan’s national language, and vice versa, will be an idea worth a shot as people ‘are more comfortable in the local languages.


Legal Disclaimer: MENAFN provides the information “as is” without warranty of any kind. We do not accept any responsibility or liability for the accuracy, content, images, videos, licenses, completeness, legality, or reliability of the information contained in this article. If you have any complaints or copyright issues related to this article, kindly contact the provider above.