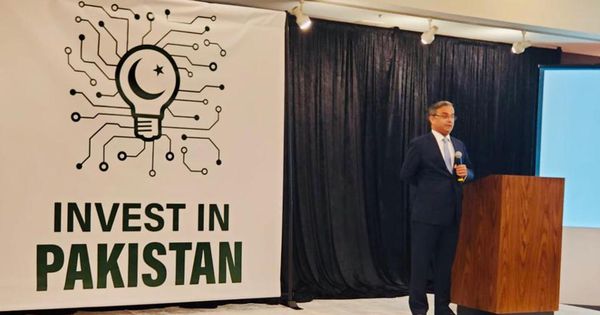 Pakistan is pushing its IT sector to U.S. companies and investors, hoping international deals will translate to a bottom-line boost for the country’s struggling economy.

The most visible part of this charm offensive came earlier this month with a day-long Silicon Valley conference in San Jose, Calif., backed by the Pakistani government.

“If I were to look at our overall economic performance, the IT sector comes out as one that has performed the best,” said Asad Majeed Khan, the Pakistani ambassador to the United States and one of the conference speakers. “The whole idea of doing the tech summit was to inform the companies in the Silicon Valley about what is our potential and what is it we can do together. ”

“Over the years, the government has not done as much as it should have in terms of focusing on expanding the IT sector,” Ambassador Khan. “In past two or three years, though, we’ve seen some phenomenal growth.”

In part that’s because the country’s charismatic new prime minister, former international cricket star Imran Khan, has made the economy his top priority.

“The economy is his primary and principal focus,” Ambassador Khan said. “The manner in which he’s approaching foreign policy is rooted in his desire to turn around the economy and provide jobs for the people.”

As part of a broader set of initiatives, the country is trying to grow its already substantial tech sector and attract international investment, especially from the United States and neighboring China, which already has built a vast deep-sea harbor and naval port in Gwadar, on the Arabian Sea, as part of the China-Pakistan Economic Corridor.

Pakistan already generates at least $4 billion a year in IT exports, though the ambassador said the number is likely higher because some IT-related payments get lumped in with international remittances. The biggest areas of operation are software development, Business Processing Offices and call centers. Now, the country hopes to move into more high-end sectors such as AI, gaming and visual effects. One potential opportunity discussed at the San Jose conference is moving into RISC-V microchip fabrication and export.

“Our IT success story is not as widely known and as widely shared as it should be,” Ambassador Khan said. “If you were to only compare the numbers, the actual potential, then Pakistan has really come a long way in terms of harnessing the IT potential.”

The ambassador reels off a number of statistics suggesting the country’s resources and opportunities:

There are several continuing challenges, however.

During the United Nations’ opening-week ceremonies this month, Imran Khan spotlighted the plight of Kashmir, the disputed region wedged between India, Pakistan and China. India dramatically ramped up tensions in the region when it recently revoked special autonomous status in its part of the region, and imposed curfews and other security measures while locking down media and social media.

Imran Khan’s attempts to reach out to India’s Hindu nationalist-led government have so far been largely ignored. It’s an issue when two of world’s nuclear powers, which have had a string of border wars since they left British rule during the bloody 1947 Partition, continue to have poor relations along their lengthy border.

As well, Pakistan’s Northwest Territories, abutting Afghanistan and relatively autonomous and beyond central government control, are still something of a Wild West, used by Afghani and Islamist anti-government forces as bases.

And the economy still faces challenges that have forced it to seek assistance from the International Monetary Fund.

“We need to put our house in order,” Ambassador Khan said. “We need to stop the bleeding of state-owned enterprises. We’re rationalizing the tariff structure for (electrical) power, with a focus on exports. (The prime minister) wants to bring in more foreign direct investment. We are singularly focused on improving the ease of doing business.”

As part of that, Pakistan plans to continue its outreach to U.S. tech companies. The San Jose gathering is expected to become an annual event, and smaller regional gatherings will be held around the United States in coming months, Ambassador Khan said.

“The scene is set for Pakistan to take the next stage of development,” Ambassador Khan said. “That’s where we are focused. We hope to leap up the list of ease of doing business (measures) by 20 to 30 notches.”